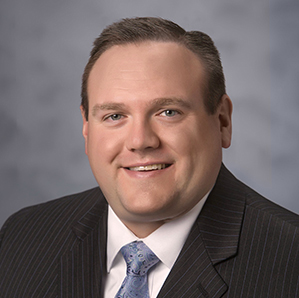 Tyler Heffron’s practice focuses on a wide array of litigated matters, where there are often millions of dollars at stake. Heffron enjoys a reputation of being responsive, thorough, and honest in his client interactions. When it comes to handling litigated matters and appearing before the Court, Heffron is strategic, smart, and aggressive. Heffron was born and raised in the small Kansas town of Wellington, where he was instilled with a strong work ethic and common sense approach to problem solving. Heffron regularly appears before the Kansas state, federal, and bankruptcy courts. Heffron has trial and evidentiary hearing experience in a diverse range of litigated matters, including jury trial, bench trial, and oral argument before the Kansas appellate courts.

An example of Heffron’s extensive litigation experience include these recent results:

• Obtaining summary judgment on behalf of his client, and a dismissal with prejudice, against an allegedly catastrophic personal injury claim by successfully arguing the “going and coming rule” applied under Kansas law to prevent vicarious liability from being imposed on an employer in a third-party liability lawsuit. Jones v. Blattner Energy, Inc., et al., 2019 WL4340867 (D. Kan. September 12, 2019) (unpub)

• The complex settlement, in 2019, of a multi-year lawsuit involving disputes between a large, regional oil and gas conglomerate and more than 70 owners of a natural gas processing plant located in South Central Kansas. The claims and counterclaims in the lawsuit involved complex issues of breach of contract, quantum meruit, and misrepresentation, as well as the in-depth use of oil and gas accounting experts.

• The representation of clients as creditors in bankruptcy, including litigation of complex issues in Chapter 11 and 13 bankruptcy cases on behalf of financial institutions, private investment groups, and municipalities/government bodies.

• Obtaining dismissal of a personal injury claim on behalf of his client, and successfully defending the dismissal through the Kansas appellate courts, on grounds the claim was barred by the statute of limitation and service of process was improper. Plaintiff sought review of the Kansas appellate decisions by the United States Supreme Court by arguing Plaintiff’s due process rights were violated, but Plaintiff’s Petition for Review was denied. See Turrubiates v. Family Practice Associates of Western Kansas, LLC, 249 P.3d 468, 2011 WL 1377083 (Kan. Ct. App. April 8, 2011) (unpub), review denied, (Kan. Jan. 20, 2012).

• The complex settlement and court approval of a class action oil and gas royalty lawsuit brought against a Kansas oil and gas producer alleging the underpayment of gas royalties. The class of plaintiffs claimed damages were in the millions of dollars.

• Obtaining dismissal of a bad faith insurance claim on behalf of his client by successfully arguing the claim was barred by the contractual provisions of the insurance policy. Plaintiff claimed damages were in the millions of dollars. See Infinity Energy Resources v. St. Paul Fire & Marine Ins. Co., 2013 WL 3792899 (D. Kan. July 19, 2013) (unpub).