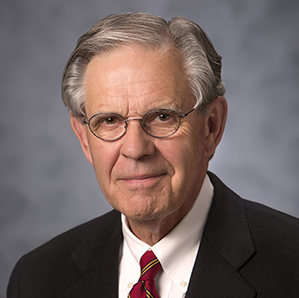 Tim McKee is Triplett Woolf Garretson, LLC’s senior energy and regulatory attorney, having served as a Commissioner and as Chairman of the Kansas Corporation Commission. Mr. McKee, a Wichita native, received his B.A. from Wichita State University in 1965, served in the Peace Corps with his wife Barbara in Brazil from 1965-1967, and received his J.D. from the Washburn University School of Law with honors in 1970 where he served as an editor of the Law Journal. Mr. McKee began his legal career in Wichita in 1970 and joined Martin, Pringle et al. in 1977, where he was a partner. In 1985, he became one of the founding partners of Triplett Woolf Garretson, remaining with the firm until his appointment by Governor Graves as a Member of the Kansas Corporation Commission (KCC) in 1995.

Since the early 1970s, Mr. McKee’s legal practice has focused on representation of business clients in litigated and regulated matters involving oil and gas and utility issues, various law and regulatory matters. He is a member of the Rocky Mountain Mineral Law Foundation, and has been a frequent presenter at numerous seminars dealing with natural resource and energy law programs of the Kansas Bar Association and at Washburn University School of Law. He served as the Chairman of the Oil, Gas and Mineral Law Section of the Kansas Bar Association for 1995-96. While Chairman of the KCC, Mr. McKee served on the National Association of Regulatory Utility Commissioners’ Committee on Natural Gas and the International Ad Hoc Committee. He was also Kansas’ official representative to the Interstate Oil and Gas Compact Commission and organized the IOGCC’s Committee on gas gathering regulation.

As KCC Chairman, Mr. McKee was a member of the gas gathering task force created by the Kansas Legislature to study and recommend policy for Kansas with respect to gas gathering legislation. He was the spokesman for the KCC’s effort to establish a system of open access to gas gathering lines for all producers in the state, while minimizing through as “light handed” regulation as possible, the burden on the gas gathering industry, which supported his efforts. Mr. McKee was also responsible for the Commission’s efforts to obtain highly qualified and unbiased expertise for the preparation of a study and special report for submission by the KCC to the Kansas Legislature’s Retail Electric Wheeling Task Force.

In his private practice, Mr. McKee has made numerous appearances before the KCC and handled both litigation and regulatory matters for Kinder Morgan Energy Partners, L.P., Reeder Energy Partners, L.P., PetroSantander (USA) Inc., Lario Oil & Gas, AT&T, Barrett Resources Corporation, Osborn Heirs Company, Ltd., Crossbar Energy LLC, Zenith Drilling Company, Inc., Devon Energy Corporation, Wichita Area Builders’ Association, Vess Energy, L.L.C., Electric Cooperatives, the City of Wichita, as well as other municipal utilities, U.S.D. 259 and The Williams Companies, Inc. He has also consulted for the Kansas Independent Oil and Gas Association and the City of Wichita with respect to electric energy matters and wind generation. Mr. McKee has also appeared as an expert witness on natural gas and gas gathering issues. His practice includes not only contractual and operational matters but title opinions for the exploration and production business. Equally important to substantive knowledge of the law is knowledge of the structure, function and personalities of the courts and regulatory bodies. In this regard, Mr. McKee has created and maintains an outstanding relationship with the employees and officials of Kansas’ regulatory and governmental agencies. Mr. McKee has been active in civic affairs having served as President of the Board of Rainbows United, the Mental Health Association of South Central Kansas, and as a board member of the Kansas Health Foundation and Kansas Big Brothers Big Sisters, Inc. He currently serves as a board member of the Wichita Bar Association’s Ethics and Grievance Committee, and the Kansas Humane Society.

In early 2006, Mr. McKee was initially appointed to the Kansas Electric Transmission Authority (KETA) by Governor Kathleen Sebelius and reappointed and confirmed for a second term in January 2010. Mr. McKee holds the Martindale Hubble law directory’s highest AV rating for attorneys and was named Best Lawyers 2018 “Lawyer of the Year” in Natural Resource Law.